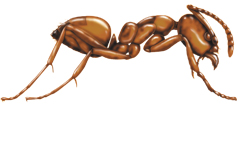 Size: Workers of this varieties are about 1-eighth of an inch in size.

Color: Varies from dark brown to black color, and the entire body is usually glossy in appearance.:

Behavior: The colonies of Argentine ants can easily develop rather large and contain tens of thousands of workers and numerous queens. Each and every colony are likely to be split into sub colonies, located in various best suited harborages and interconnected by established trunk trails.

These sub colonies will range from a couple of hundred to 1000s of ants. Because members of two separate colonies are not aggressive toward each other, colonies will frequently combine with one another. This establishes huge super-colonies which could stretch over several properties.

Argentine ants are extremely aggressive and will chase away local varieties of ants, creating an environment where they are the "king" of the anthill, so to speak. Their primary food supply over the warm months is the sweet honeydew that is generated by aphids and mealybugs. The presence of fruit trees, roses and other plants that attract aphids often contributes to Argentine ant infestations.

Although their bodily characteristics, such as size and color, are the primary method of identifying Argentine ants, habitat and colony formation can also help with identification. As their name suggests, Argentine ants originated from Northern Argentina and first made their way to the United States in the late 19th Century, when they were likely unloaded on freight vessels in New Orleans. Nowadays, they are prevalent in Southern California, however they may also be found in states along the Gulf Coast.

Argentine ants develop colonies outdoors, preferring to build shallow nests beneath stones, boards as well as other items that may offer protection. Sub colonies is probably found in stacks of lumber, bricks or debris; in landscaping mulch or other landscaping features; behind brick and stone veneer; within and underneath insulation; and in wall voids or in any other suitable void.


Why are Argentine ants Bad?

Argentine ants can cause a number of issues. They may enter homes through crevices and voids, and they are capable of producing rapidly growing colonies that swiftly become large. Commonly, when they do go into homes, it is usually looking for food and water.

Yet another intriguing characteristic of Argentine ants is that they can protect populations of insects, like mealybugs, scales and aphids, that could damage plants. Due to the fact Argentine ants feast upon the honeydew produced by these insects, they may offer them protection, even relocating them to better habitats where they're able to thrive, continuing to make the food the ants require to survive.

Fortunately, Argentine ants usually do not sting or bite human beings, and they are generally mostly just a nuisance whenever they are discovered in homes.

In reality, Argentine ants pose a greater threat to other insects because they're an intrusive species. Not only can they chase away other local varieties of ants, they also can even adversely affect populations of pollinators and vertebrates.

How To Get Rid of Argentine Ants

Argentine ant infestations can quickly get worse and they can be hard to eliminate. If you live in places where these ants are typical, try these tips that can help safeguard your home and property:

Need Help? Call us Today for The Argentine Ants